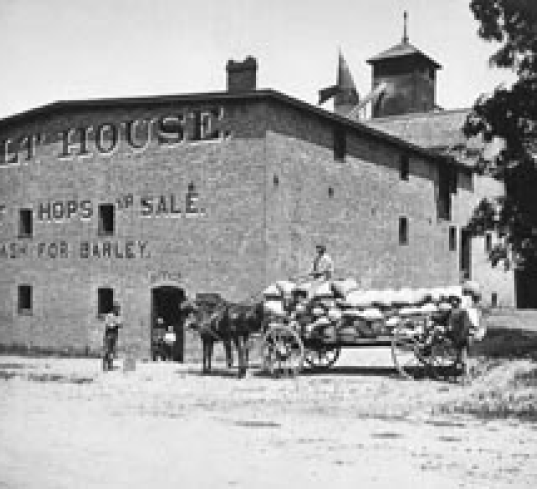 At the beginning of the Twentieth Century it was the tallest structure on the city's northeast side but a century later it is just a low wall. The Malt House that once stood at 111 East Forest Avenue is gone except for a small block building and partial wall on the northeast corner of Bob and Jan Anschuetz' neighboring property, and parts of the foundation buried under grass. But for over forty years, its brick three stories dwarfed the smaller surrounding houses and empty fields where Dwight, Stanley and Hemphill streets are now.

The Malt House was a tribute to Ypsilanti's booming business culture in the late 1800s and one man's ambition in particular. Frederick J. Swaine had come in 1871 to Michigan from Dorset in England where he had been raised in a castle, albeit as an orphan. He left his personal circumstances behind him, shrouded in secrecy, but he was clearly not a penniless orphan as his resources enabled him to visit friends inYpsilanti, relocate here, marry, build a large home and invest in a small business allowing it to improve significantly, all within a few years. In the land where the self-made man was the measure of success, this young man found success on every side, in business and also his personal life.

Frederick married Eliza George, daughter of George George (yes, that was his real name) who had been deeded the property on the corner of North River Street and East Forest Avenue when the Peck Primary School had relocated from there in 1866. (In fact, the old school building was later incorporated into the Malt House.) He entered into the business of making malt (a necessary ingredient in the production of beer), a business already in operation, with brothers-in-law Worger George and Leonard C. Wallington (married to Eliza's sister Carrie). Swaine quickly became the sole owner. He dreamed big, enlarging the Malt House until it measured 50 x 94 feet in dimension and built a two story brick Italianate home beside it (still standing at 101 East Forest) practically the same year he got married. Swaine then identified himself on stationery as a "Malster" and "Dealer in Barley, Malt and Hops," skills that he must have learned even as he began in the business.

The malt business thrived; output increased from 11,000 bushels in 1874 to 40,000 bushels in 1880. The first sidewalk in the city ran in front of the Swaine home and Malt House (the local cows preferred this sidewalk and had to be constantly chased off it when being herded toward the river bank by local boy Frank Lidke) and the residence was among the first to have electricity in town. Swaine became a local leader in business and politics and enthusiastically participated in theatrical productions. But he died suddenly in April 1897, leaving a widow and two young daughters (two sons had died very young), not as adept as he perhaps was at running the operation. The administrator of his estate, local banker Robert Hemphill, published in the newspaper that he would continue to honor commitments by buying barley and manufacturing malt, but that must have been a temporary solution. Fire insurance maps of 1909 show that a large portion of the Malt House was being used for the storage of ladders, no doubt for the young Michigan Ladder Company down the street. Anyway, Prohibition was a growing movement and it must have been obvious that the malt industry was ultimately doomed.

Within a few years, the property was sold to George Jackson, a local carpenter, who demolished the Malt House, planning initially to build two dwellings on the site with the bricks from it. Ultimately the bricks were used to build the Wrigley store on Michigan Avenue. Eventually one dwelling, a Sears kit home, was built on the lot in 1927 by newlyweds Frank and Kitty Lidke.

The April 13, 1912 Ypsilanti Daily Press described the Malt House as one of the city's oldest landmarks in a story about its upcoming demolition on the front page, right next to coverage of the death of Clara Barton, another icon of the previous century gone. The article suggested that the Malt House be "preserved" . . . in pictures that is, as indeed it was before it was torn down. The story disappeared quickly as well however, as coverage of the sinking of the Titanic eclipsed it on the front pages of successive newspapers. Largeness alone could prevent neither a new ship nor old landmark from disappearing into history.

All information has been gleaned from the resources of the Ypsilanti Historical Society Archives and Bob and Jan Anschuetz.